Okay, so the watercooler chat has to be all about the Muppets. This is the kinda show that’s going to be so controversial that it’s going to be one of those “much watch” tv moments. The critics are complaining that it’s not for kids. Duh, if you want kid television watch nickelodeon. But the adult humor to me was enough to be over a kid’s head.

The whole series is done in a reality show format so we get to know the intimate little details of the muppets. It’s not the 70’s song and dance show anymore, it’s a rebooted Muppets for 2015. For instance, Fozzie was talking about how he had put a dating ad with the headline “Passionate Bear Looking for Love” and he was slightly taken aback by the responses that he received that were “unwanted” …

This joke is clearly talking about the gay community as “bear” is a term that big hairy gay men call themselves. It was funny and clever. Of course the episode sprinkles little sexual innuendos here and there, so if you’re looking for Sesame Street… well turn to PBS. As far as I could tell from social media, everyone who watched it thought it was hilarious.

After The Muppets were over, I quickly flipped stations to watch Scream Queens. It was 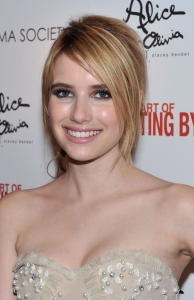 already 30 minutes in but once again, kept me laughing in horror. Emma Roberts is the perfect “mean girl” as the head honcho of her sorority and for all my “gay boys” out there Nick Jonas does not disappoint at all. He in fact plays a gay “mean boy” himself and in the 2 hour premiere offers plenty of eye candy to look at. The premise is that people keep

dying on the campus but the bodies keep disappearing so how can you call the cops? The comedy is hilarious as it pokes fun at the younger generation for instance, Ariana Grande’s character get’s killed but while it’s happening she has to update Facebook to let everyone know. If you enjoyed Coven, you’re going to like this show.

Now finally, I did flip to check out Limitless on CBS. I’m still torn on whether it will keep my attention. It feels somewhat like the mentalist. Bradley Cooper did make an appearance but I wonder if we will tire seeing this guy pill pop every episode just to keep his super powers.