Those that know me , know that I’m very anti-religious or the organization of thus. My beliefs are very philosophical in nature. I figured that being an artist, I just look at the world differently. Some friends questioned whether I was Athiest… since I just really don’t believe the “biblical” definition of “God” as truth. He was just…too human (in the fickle, petty way) . The personality of God seemed to change with whoever the writer was…with a couple of similarities here and there. The God of Abraham is very dominating (kill!!!) while the god of Moses is very legalistic (I command!!!) , the God of Elijah is to be feared (I’m better than all these other gods!) ,  the God of David is to be loved (Wow, I love this guy) ,  the God of Jesus is very paternal (That’s my boy!) , the God of Peter is exclusive (Don’t be like them) , yet the God of Paul is very inclusive and reformist (Forget what I said, I like them too… but change!) .

Who is right? All of them? None of them? And why do we do put more weight on any of these people than any others who have written about their “god experience”?

I could see the bias in much of the biblical writings. Despite people’s faith…it was obvious that it’s written by men who have a generally the same “judeo” beliefs but may differ on the application of it.

In studying other religions I found the same basic thing. We all feel something is there… and well Atheism says, if you can’t prove it, then it’s not there. But yet, as rational as I am… I can rationally say, there’s a lot I can’t prove exist but yet I still believe in…like love. I believe love is more than just a chemical or hormonal reaction in my brain… its an intangible something that connects me to other people. And sometimes that connection is not explainable.

With that… I’ve have found it difficult to understand why God allows shit to happen to people no matter how good they are…or even if they’re children. If God was there watching and judging, and answering prayers for who would win the next Superbowl or get their job promotion, he sure was passive when it came to rape, poverty, and diseased people.

That’s when I stopped.

I stopped objectifying and personifying “God”. What’s my rational thought?

Everything has a nucleus or source (eggs, solar systems, cells, atoms) . That doesn’t mean the nucleus is micromanaging it’s satellites but they’re influenced by it in some way. But the universal “nucleus” of all is a force.. a primal force. It’s in all things… and how we “decide” to express or repress that “force” is up to us.

So in all retrospect, I believe that the primal source, that nucleus, where ever it may be is God…but it’s not as human and mundane as we like to believe. While the moon is influenced by the earth…and the earth is influenced by the moon. As above …so below… and “God” influences us as much as we influence “God”.

In my studies, I have found that Deism… the idea that God exists but isn’t micromanaging life, came the closest to my personal ideas about God–that God is a state of being NOT a being and that state is manifested through us. The universe is full of expansion and contractions… stars and black holes…with all that energy, we really need to redefine what “being alive” truly is. We are so tiny in comparison yet we perceive ourselves to have some importance in the big picture of things (maybe we do, maybe we don’t) –who knows. 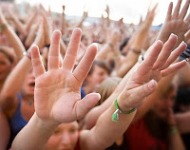 I’m a big believer in the collective conscious and when we put all our energy together…things happen (good or bad). The more we agree.. the more “GOD FORCE” collects… which is why churches feel they have a spiritual experience…but the same can happen at a Justin Beiber concert with a bunch of teenage girls.

So Yes–Athiest, there is no person watching you from above but yes, Christians there is a force inside you empowering you. But I find personifying that force as silly you people personifying the Sun (it helps you relate but …anything else is fables and myths) … and to some extent an Athiest can still make a claim that God doesn’t exist (in terms of actual matter) because when we get down to metaphysics of things… well that’s another topic.

Where Christianity asks me to ignore common sense for blind faith in someone’s ancient “revelation” . Deism says it’s okay to ask questions and figure out the divine by simply … living life and observing the world around you.